As you read this email, COP26 is starting. The highly anticipated United Nations Climate Conference - cancelled last year due to covid - is facing mounting pressure to deliver unprecedented policy change for our planet 🌍. Atlas, as an observing organization, is committed to doing its part.

👉 That’s why, today, we are launching a campaign to ban fossil fuel subsidies, to accelerate the transition from the main sources of CO2 emissions to a green future. Read more below, and do your part for the future of our planet:

Wanna hear about the biggest contradiction of our time? While most governments speak about the threat of climate change and the need for a green transition - and in rare cases also invest in it - they keep on pumping huge sums of money into fossil fuel subsidies 🙉, such as special tax treatments for oil & gas companies, responsible for 89% of CO2 emissions. In 2020, the global figure amounted to $5.9 trillion, and is expected to rise to $6.4 trillion in 2025! Countries like the 🇺🇸 United States ($ 31.5 billion), 🇦🇺 Australia ($10.3 billion), and 🇮🇹 Italy (€34.6 billion) should start putting their wallet where their mouth is. Here at Atlas, we will make sure this happens.

This is why our co-founders Andrea and Colombe travelled all the way to Glasgow (by train 🚅😃) to launch our “Ban Fossil Fuel Subsidies” campaign, a global effort with national ramifications to make sure that fossil fuel subsidies become a relic of the past. 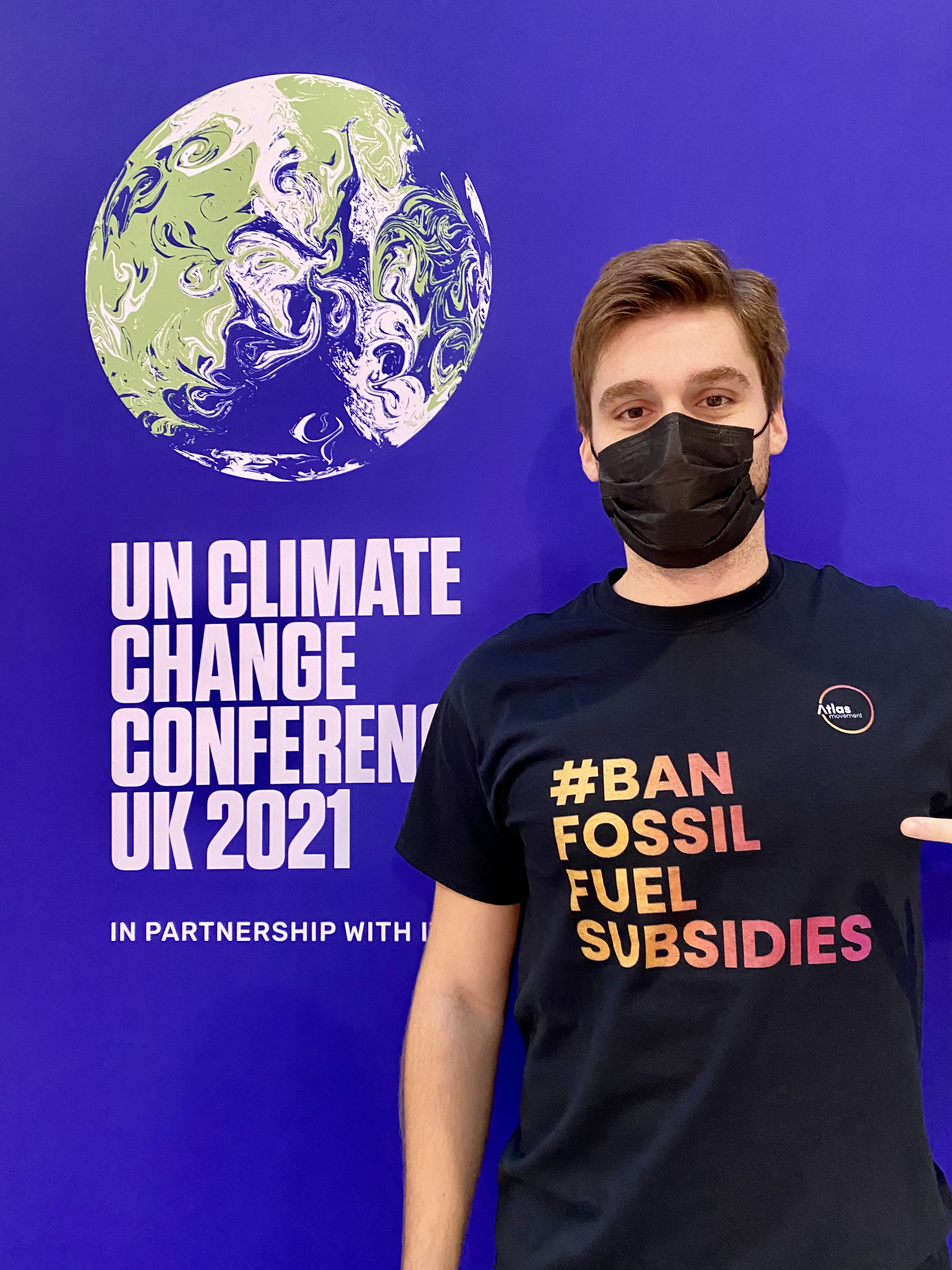 The campaign is an effort to point out the contradiction in the green policies of most countries on the planet, and ensure that from COP26 onwards, governments will be held accountable when trying to gaslight their citizens. Our campaign team has already created a large coalition of organizations and influencers to push this forward and is continually working to expand it 🌴. So what can YOU do? First and foremost...

And then check out our official webpage to learn about all the ways to get involved, including volunteering for the cause, building a national campaign, donating, and much more!

WE CARE ABOUT OUR PLANET, BUT WE ARE NOT DROPPING THE BALL ON DEMOCRACY EITHER 🕊️!

While a great team of volunteers is championing our green cause, another one is endlessly working to defend our freedom to express political views and elect our leaders in fair elections. In fact, in the last couple of weeks, Atlas’ exploratory work on the idea of creating the first Digital State 📱 in the history of humankind has not halted. While this is a longer piece, here are some of the key takeaways so far:

💪 There is a significant and engaged community on this topic. Mostly coming from the cryptocurrency/blockchain space, techies from around the world are envisioning the endless possibilities of a Digital State (read this piece!). Where can Atlas add value then❓ Well, we will bring to the table our political experience to complement the tech backbone and… we will make it happen!

🔀 There are two ways forward: designing a full concept vs. building a community to design the concept itself. On one hand, we are tempted to deep dive into which services a Digital State should offer and which governance it should have before going live with it. On the other hand, a wide, decentralized community may be better placed to establish these criteria. So far, the team is thinking about a mixed approach (having an initial solid proposal to be reviewed by a broad community) but feedback is welcomed!

… and while the Digital State team is squeezing their brains out, some other democracy-loving Atlassians are considering how to advance the struggle for freedom in Hong Kong 🇭🇰, where democracy is officially banned (read here about the tragic departure of Amnesty from the territory). The team will soon launch a survey to learn your thoughts on whether the idea of setting up a shadow government abroad can be a winning one: 👀 check out our social media to partake in that!

LET’S TALK CONTENT NOW: ARE YOU AWARE THAT WE WANT THE UNITED NATIONS 🇺🇳 TO LEAP FORWARD? 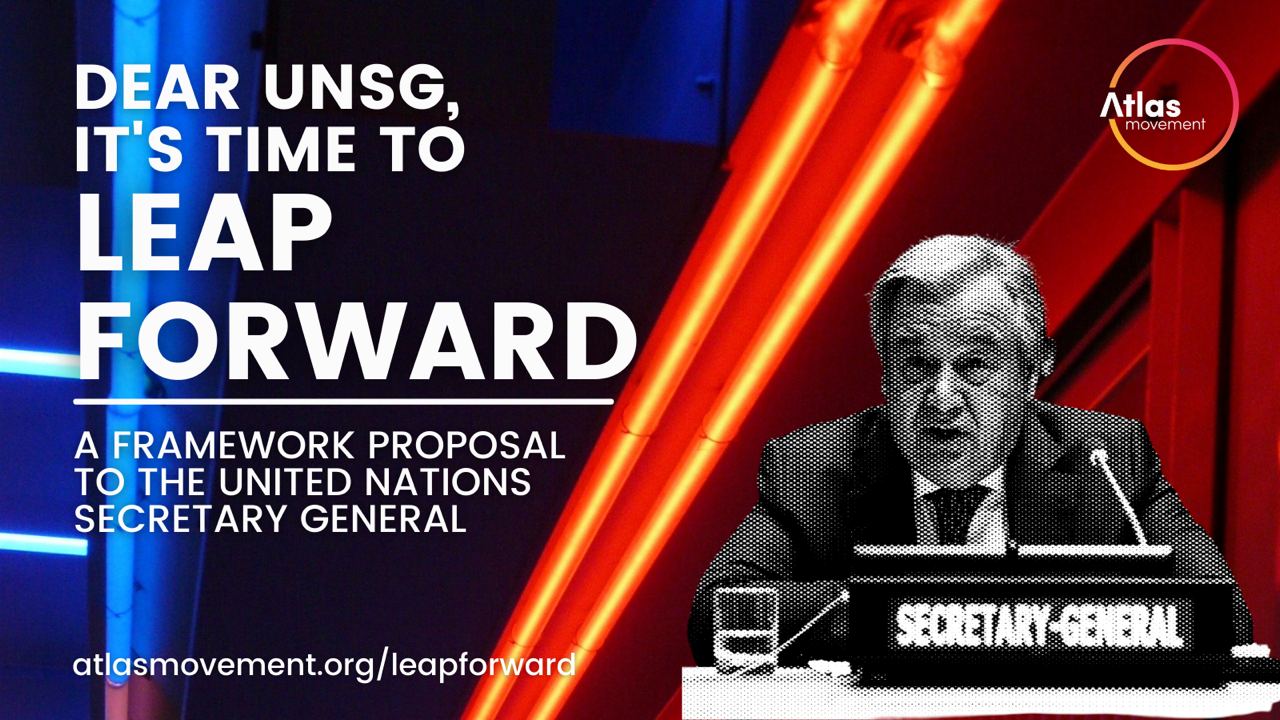 The United Nations Secretary-General was selected for a second term in 2021. The people had no say over this choice in the current process ❌. There was no free and fair, popular, democratic exercise but rather backroom deals involving - in particular - the Permanent five nations of the Security Council (China, France, Russia, USA, and the U.K.). However, today's planet features many new, vibrant democracies whose populations long for representation 🗳️.

After running the Forward primaries in which people from all continents participated and our candidate was disregarded without any proper due process, we are now presenting the Leap Forward 🚀 framework to the Secretary-General. This people-backed, equitist vision for the UN leader aims to:

⭕ Right the wrongs of past generations through radical actions,

🤝 Seize today’s opportunities through collaboration, and

📝 Imagine and co-create our future, through consultation

We submitted this framework to the UN Secretary-General, requesting that it be considered and applied. Our team will also try to deliver it in person in New York in December. If you know anyone that can help us make this happen, please reply to this newsletter ;)

Thank you once more for joining us on this journey and for supporting us all the way. As our member Mohamed from Egypt 🇪🇬 said: “by joining Atlas I want to achieve change, justice, and peace”. I am sure you want the same!

On behalf of the Atlas team

If in fit midst of your busy daily life, you are managing to follow developments at the G7 meeting in Germany, you might be pleased with some of the outcomes filtering out. For example, the G7 countries have renewed their staunch commitments to support...

The world is scary today. Humanity faces an environmental crisis; authoritarians often have the upper hand, and inequalities are soaring. Traditional political agendas seem ineffective as - even in the rare cases when politicians are competent and ready to do the right thing -...