Member Voices | I'm not a likely activist yet here I am.

Here is Linda's story of why she joined Atlas after her retirement.

Linda is the leader at Atlas' editorial team and the USA team.

I am not a likely activist. I have never liked to insert myself into controversy, yet here I am. After 3.5 years of retirement following a fulfilling healthcare-related career, I have become restless and want to use my newly-acquired free time to contribute to society in a tangible way. As most of us have in the last few years, I felt discouraged about leadership in the U.S. and around the world in general. I listened to endless discussions about problems and outrage on all sides of the aisle, but what I didn’t hear enough of was a sense of hope… a feeling that we as individuals could actually DO something to improve things and not just wait for the inevitable doom ahead.

I listened to endless discussions about problems and outrage on all sides of the aisle, but what I didn’t hear enough of was a sense of hope...

After 3.5 years of retirement, I want to be part of the do-ers

Last summer the international social activist group, NOW! caught my attention. I joined them because they were do-ers and I took a small part in some of their campaigns regarding environmentalism and #VaccinesWithoutBorders. As they launch an even more ambitious movement that will include an Election/Candidate support focus on July 18 - Atlas - they will have the manpower and clout to act on their passions even more than before, forming teams to take concrete action when they see injustices that need to be brought to light. I want to be part of that! 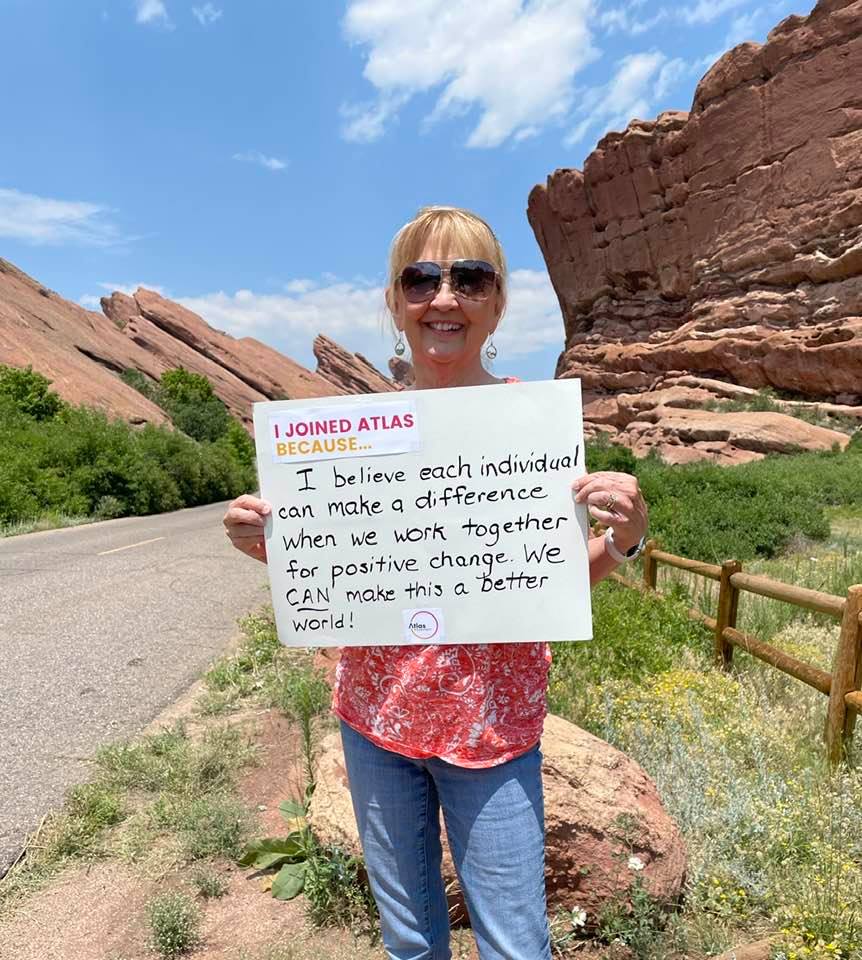 Linda is leading Atlas' editorial team and the USA team.

Atlas leaders and team members feel, as I long have, that our problems are not usually unique to just one nation and we are linked together more powerfully every day. With the speed of technology continuing to explode, we will not go backwards. It is time to educate each other, put our heads, hearts and talents together, find workable solutions, and ACT to protect individual rights and freedoms all over the world.

Why have I never seen myself as an activist?

Why have I never seen myself as an activist? I grew up in a very political household in the 1950-s and 60’s in the state of Kansas, U.S. My dad was active politically and although I admired him for being involved, I felt disillusioned as I got older, watching the compromises politicians with good intentions often had to make to stay elected. I began to feel like it was just a game and decided politics would never be for me.

The most important message my father passed on to me, however, was the belief that each person’s voice and vote count. Although slightly too young to serve in World War II, he had watched the developments in Europe with dismay. He impressed upon me how crucial it is that we as individuals keep a close eye on our leadership, hold them accountable, and speak up immediately if we begin to see that the rights of any group of citizens are slipping away. He believed that what happened in many European countries could happen in the U.S. or anywhere in the world and it’s up to each of us to protect our democracy.

Looking back, although I did not take his advice as far as politics, I applied the same idea to my career. I was content with keeping a low profile at first, but every time I saw a problem, I looked for solutions and began to promote my ideas. By reaching out and being willing to admit
inexperience or lack of knowledge on a topic, I learned to work on a team, connected with many amazing colleagues, learned from them and even became a leader and a teacher.

I was content with keeping a low profile at first, but every time I saw a problem, I looked for solutions and began to promote my ideas.

From that work experience, I see now that for me, it’s time to take similar steps in other areas of my life that I am concerned about. Even if I feel that I’m not enough of a leader, I’m not talented enough, I’m not informed enough, and (in my case) I’m not young enough (!), I can put one foot in front of the other and do my part, even if it seems small, to further a larger cause that I believe in wholeheartedly.

I’m looking forward to getting to know more people from all over the world and hearing your stories as more of you join Atlas so that we can work together finding solutions to the daunting problems ahead. Don’t be bashful! If I can volunteer and succeed at making even a small difference, anyone can!