Presenting the story of Muhammed Rey Dwi Pangestu and some background that led him to join Atlas.

He is from Jakarta, Indonesia and dedicates his life to improving the quality of life and rights of others.

“I am on strict Covid lock-down here in Indonesia, but I will find a way to support Atlas,” Muhammed Rey Dwi (“Rey”) Pangestu told the team as Atlas prepared for its July 18th launch.  He could not take an outdoor photo of himself holding up a sign in front of a local landmark like many of the other members of Atlas around the world, but as you can see from his smile, being confined to his apartment didn’t dampen his enthusiasm.

Rey is one of the newest members of Atlas, and his delight in discovering this movement is clear in the eloquent message he displayed on his Launch Day sign. He brings a contagious energy and fresh eyes to the Atlas movement as they address and develop innovative solutions to the dilemmas of our time. 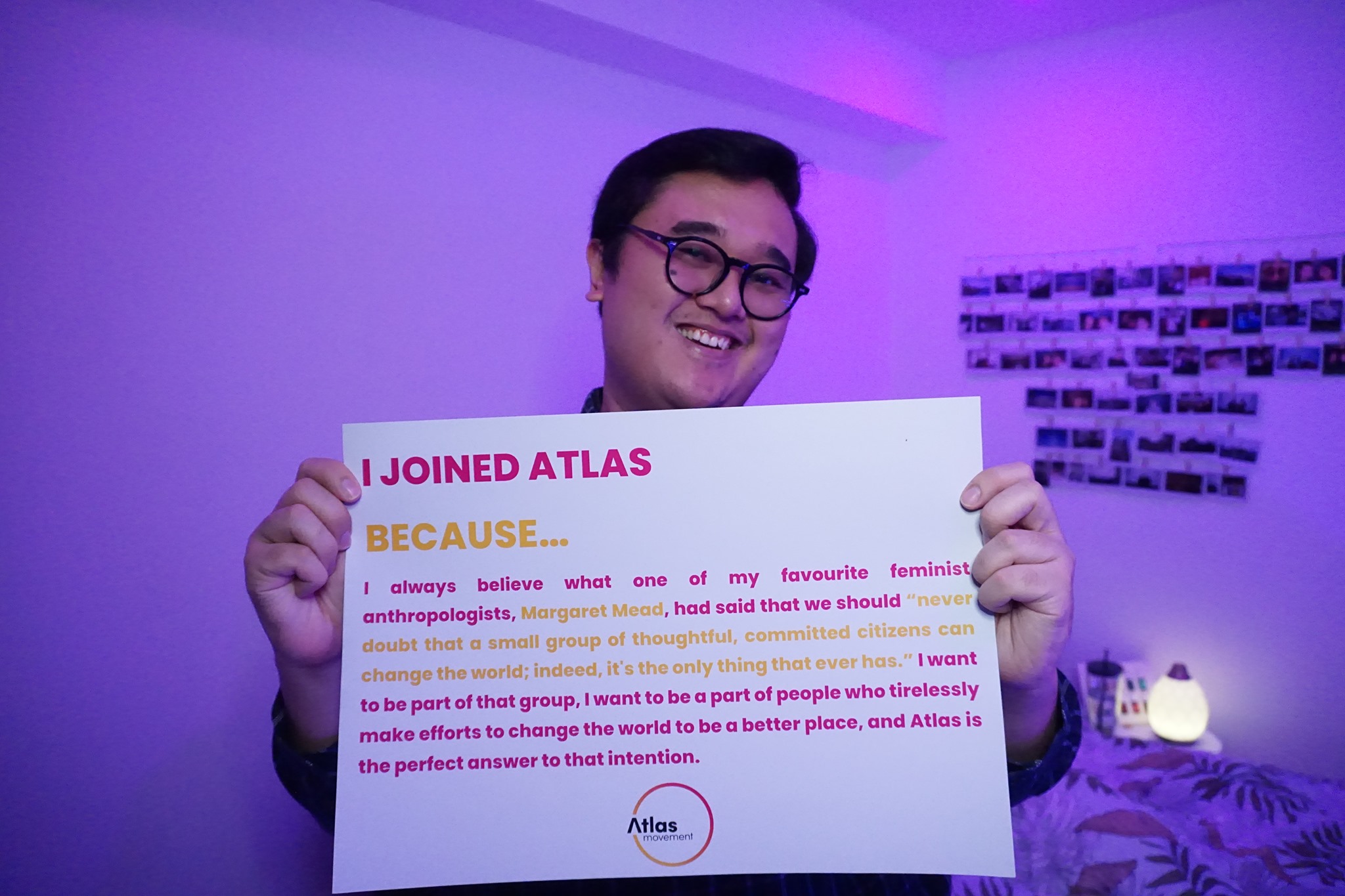 Rey’s work and leadership throughout his education and career clearly align with the visions and goals of Atlas, namely to protect and promote individuals’ freedoms and rights. He is currently working as a Project Manager at one of the NGOs in Indonesia, Rutgers WPF Indonesia where his greatest passion is improving sexual and reproductive health and quality education for children and other marginalized populations.

I am enthusiastic about addressing social injustice in Indonesia

His most recent program addresses the issues of harmful practices to girls and women, especially child marriage practices. He does that by conducting various approaches from community engagement to policy advocacy.

In his spare time, he enjoys playing Indonesian traditional music and promoted the richness of Indonesia culture to Europe and the United States back when he was getting his bachelor’s degree.

Unfortunately, Rey has firsthand experience living in a country currently back on lockdown because of the inequity of Covid vaccine distribution around the world, another major focus of Atlas.   In some parts of the world with more readily available vaccines, citizens are increasingly back to in-person work and school, restaurants are open, and large gatherings are allowed.  While in other countries such as Indonesia, where Covid restrictions were recently extended into August 2021, low vaccination rates have allowed the highly contagious Delta variant and others to cause more deadly outbreaks than ever in recent weeks and months.

The World Health Organization (WHO) was the most logical place to take charge of bringing nations together and driving a unified, cooperative approach towards containing Covid and fair distribution of the vaccines. As we know, they failed at the task.  An Atlas team is already actively working to demand better leadership and reform of the WHO and Rey is eager to join this team. Check out the campaign here

Never doubt that a small group of thoughtful, committed citizens can change the world; indeed, it's the only thing that ever has.

One of Rey's favorite anthropologists, Margaret Mead, said we should "never doubt that a small group of thoughtful, committed citizens can change the world; indeed, it's the only thing that ever has." Rey's life work embodies these inspirational words. His story demonstrates his passions, talents, experience, and persistence in advocating for the underserved.

Atlas is excited to welcome Rey! He is exactly who we need to help make Atlas goals a reality!